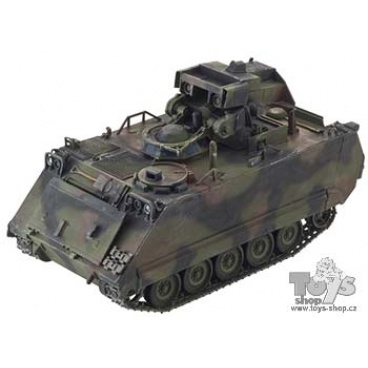 Revell
Kód: FMT 0403087
Naše cena
513 Kč s DPH
Původní cena
649 Kč ušetříte 136 Kč (21%)
Popis a parametry
Hlídání ceny
Dotaz na prodejce
Anti-tank vehicles with their long-range guided missiles attack enemy tanks before these can operate with their cannon. The US Army therefore developed the M901 ITV (Improved TOW Vehicle) which combines the TOW guided missile system with the M113A2 armoured personnel carrier and can attack enemy tanks at distances up to 3,750 m. Over 2,500 of these units were built which, after conversion to the firing capability of the TOW2 guided missile, received the designation M901A1 ITV. The model kit includes a reproduction of the traversing TOW launcher that is as detailed as the running gear and tracks, which are assembled from individual links and segments. The decals enable two different USArmy vehicles to be represented.